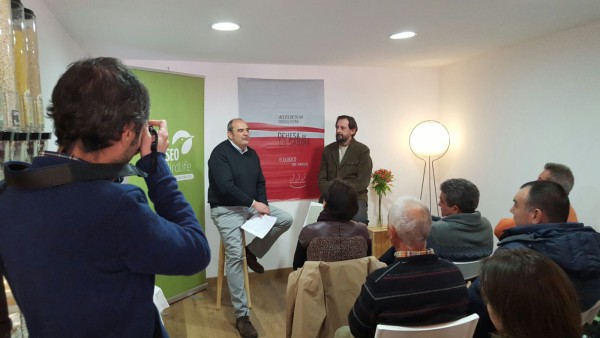 PRODUCER OF AWARD-WINNING “DEHESA DE LA SABINA” EVOO INVITES CONSUMERS TO JOIN THEM IN THEIR EFFORT TO RESTORE THE POPULATION OF BIRDS OF PREY IN THEIR OLIVE GROVES.

They will give €1 to wildlife conservation for every bottle of Organic Extra Virgin Olive Oil sold from a limited series of 2000 units. The consumer donations will be matched by Ecologica La Olivilla and the money will be used in its entirety for the implementation of an environmental program developed by the organization SEO/BirdLife.

The project was launched today and includes specific measurements to improve the birds’ habitat and encourage the nesting of kestrels, owls and barn owls across 40ha of their organic olive groves in the South of the Natural Park of Cazorla, Segura and Las Villas.

The president of Ecologica La Olivilla, Juan Ignacio Valdés, together with SEO-BirdLife’s delegate in Andalusia, José Eugenio Gutiérrez, presented today in Jaen a bird conservation project to improve the diversity of wildlife in olive groves (in particular the population of birds of prey). The project will be developed across 40 ha of organic olive groves in the region of Jaen, specifically in Huesa, Hinojares and Quesada, located in the Southern part of Cazorla’s Natural Park, and one of the most affected areas by the fire in July 2015.

As the members of the cooperative and initial promoters of this initiative explain, this is a collaborative project open to citizens and its success will largely depend on their ability to involve the community in this pressing need to preserve the fragile ecological balance of a heavily threatened, environmentally valuable region.

"The money that we raise from the sale of this limited edition of our olive oil will be used to analyze the olive groves and then take all the necessary actions to make them attractive for birds of pray”, Juan Ignacio Valdés says. “As an organic producer, we continuously work on strengthening our ecosystems, but there are some pieces of the puzzle that we cannot restore without help; hence our collaboration with the environmental organization Seo/BirdLife. Birds will complete the food chain again" he added in reference to the mole problems suffered by farmers in the area due to the lack of predators.

SEO-BirdLife’s delegate in Andalusia highlights the double value-added strategy of this project: “On one hand, the project takes place in a semi-desert that is ecologically very vulnerable, threatened by the erosion and problems stemming from mass-scale, conventional farming. Furthermore, this area was seriously damaged after last year’s terrible fire which destroyed much of the forest barrier that separated it from the Granada highlands. Improving bird populations in this area will certainly be a good indicator of how things are progressing", he explains.

"On the other hand – José Eugenio Gutiérrez adds-, this is a project that was initiated by the citizens of the area, specifically by Dehesa de la Sabina producers, but appealing right from the beginning to the community, to their consumers and their actual ability to have an impact through their purchasing decisions”.

The collaboration with Dehesa de la Sabina’s producer -Ecologica La Olivilla- complements the efforts of the environmental organization who announces the development of a follow up project on the topic of biodiversity in the olive groves. The project will be funded by the European Commission and will be launched in the coming weeks.

To ensure maximum transparency, Ecologica La Olivilla has certified before notary the numbering of the limited series, as well as the project protocols agreed to with Seo-BirdLife. They will also count with the collaboration of Tierras Vivas Consulting, who will be supporting the cooperative’s communication efforts to ensure all contributing consumers can follow the progress of the project, meet the protagonists and visit the olive farms.

"Our consumers are going to make this project possible and we are extremely thankful to them” says Juan Ignacio Valdés.

Dehesa de la Sabina is an organic EVOO produced without the use of synthetic chemicals, exclusively elaborated from Picual olives harvested at their optimal ripeness, characterized by fresh flavors of green olives, artichoke and tomato plant, and a harmonious balance between the fruitiness, bitterness and pepperiness.

← BACK TO NEWS READ ABOUT PHASE ONE →